We will discuss here only the projects presented on my web page (https://www.yo3ggx.ro)

Pocket RxTx v2.1 is available in Play Store for more than a week now.
Today I've published a 5 min. video with the new call logging functionality added in this version.

And the last Question for Today

For the new jAReC Version, which category is meant for that?

When a new version is published, I post an announcement on this forum.
Version 2.2 with a companion app and some new features/bug fixes will be available in a few weeks from now.

I don't understand your last question. You must install always the latest version.subversion from both apps to keep them in sync. If just some bug fixes for jAReC and Pocket RxTx between 2 main releases, then the version number will be 2.1.x

Thank you for your Answer !
on my second) question I just wanted to make sure that I am here in the right category.
Allright !

In the field Radio Answer do not happen at all.
but the READ function is still on ice anyway

I have more errors or questions but want to finish this part at this point.

so, that was only once

P.S. Remember that I work with Google Translate
Top


do1di wrote: ↑Wed Apr 04, 2018 7:09 pm I have not yet tested the callbook function because I mostly work remotely with the software.

This function is integrated with the radio, so the main purpose is to be used when operating remotely ..

This looks for me as a seriously communication issue. Do not use audio when in Monitoring mode.
Is not very clear for me from your description what do you intend to achieve.
Can you please make a short video with this and post it here?

So it's not the sound.
have the sound disabled.
Same problem.

But I could narrow things down.
If I set ONLY the frequency on pollig works without crash.
it crashes only when I take the SMETER polling function with it !!!
POLLING=CMD_READ_FREQ works !!!
POLLING=CMD_READ_FREQ,CMD_READ_SMETER works NOT ! ( with crashed )
but the whole READ session does not work anyway anyway.
The correct READ function and syntax is unfortunately not yet guaranteed at ICOM.
So I wait until it happens. No Problem.
Main thing I can use the remote functions before!

Thank you for your help

You're right, iCOM use some variable length answers, but this is already supported in the app. Maybe a review of the config is required based on this, but unfortunately I will not be able to do it in the following days as I'm working hard on version 2.2 and a companion app.

Hi Dan:
I test the new verion jarecmini.jar v2.0 on a raspberrypi 2B, and now it can working with a cheap USB soundcard, but the jarecmini.jar will crash when the client disconnect. 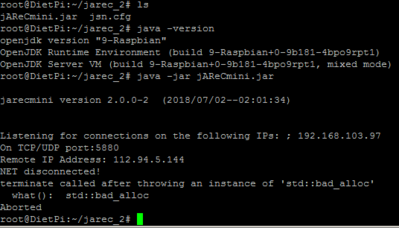 As I'm working hard now on version 3.0 for Pocket RxTx and jAReC, I will check this and fix the issue if something broken.

Can you tell us what new functions the version 3.0 has?